Insurance is generally a good business in the moral sense, in my view, serving as it does the smallest and largest of risk takers at their time of need. 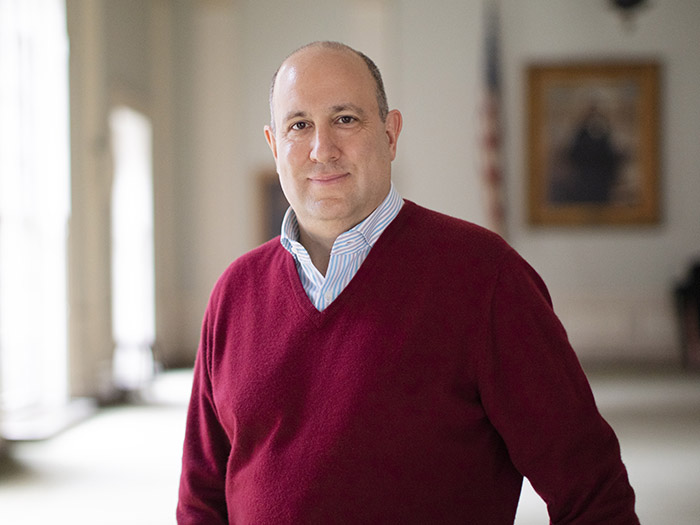 Risk & Insurance recently caught up with Steve Menzies, the chairman of Applied Underwriters, to discuss his extensive work in the nonprofit sector through his involvement in two foundations. Here are his responses to our questions.

Risk & Insurance: What was your motivation for forming your foundation?

Steve Menzies: As chairman of Applied Underwriters, an international insurer and financial services company, I know well how directly good faith, fairness and in a broad sense social stability and ethical behavior are tied to success. For me, advocacy only becomes meaningful with dedicated, personal engagement as well as sustained financial commitment.

My foundation, Bold Thinkers, is my way of expressing the will to think and then act meaningfully to solve the most difficult problems that I believe is part of our obligation as human beings.

The vast amount of money collectively within foundations and nonprofits in the United States and then worldwide is astounding. The efficiency and effectiveness of nonprofit organizations is a worthy topic for debate, but, it is certainly clear that for the most difficult issues, issues which are complex, and those which require a rapid response, few institutions are able to find their way into action.

Most charitable and philanthropic institutions today are caught up in redundant, slow-moving approaches to problems. Or, they are impeded from realizing concrete goals as a result of adopting unclear or muddled goals — and then matching them with a bureaucracy of often unimaginative nonprofit professionals who cannot deliver effectively.

The key individuals who manage each of the critical missions of my foundation — we refer to them as the “bold thinkers” — are all passionate and expert people who donate their time for the cause. My goal is to establish a mechanism that can really deliver results and realize meaningful change, unafraid of boldness and of personal action.

R&I: When was it founded and can you give us some idea of the size and experience of the foundation’s staff and board leadership?

SM: Founded in 2020, my foundation operates as a think tank with an action mission. We engage bold thinkers from our large worldwide network of independent thinkers and doers — these are business leaders, entrepreneurs, government leaders, and other influential people.

To think and act boldly is part state of mind —empathy, compassion, and optimism — the firm belief that even the hardest problems can be made right, and part action —research, resource enlistment and finely-tuned planning and execution.

By engaging the creativity of these brightest minds, we harness their intellectual and analytical power, connections and resources to uncover the root of complex problems that risk going unsolved because others perceive that problem as too difficult or overwhelming.

My foundation is distinctive in its approach in that we’re not bound by any singular cause, but by the coalescence of critical missions we’re engaged in at any given time. We commit the full force of our expertise, resources and passion to these critical missions.

R&I: Can you give us an idea of who some of your bold thinkers are, their backgrounds, etc.?

I’d like to talk about Dr. Charles Flynn, who is leading the foundation’s professional training and partnered infrastructure mission. Their current focus is on alleviating the nursing shortage in developing countries.

Dr. Flynn is the president emeritus of the College of Mount Saint Vincent, where he served as the president of the college for 20 years. The college has a remarkable reputation, especially in its nursing programs.

The professional training and partnered infrastructure mission will arrange for U.S. colleges to export their nursing curriculums and then monitor the quality and performance remotely, so that students in developing countries receive a degree from the American institution.

The target nation benefits by the creation of nurses at all levels, and the U.S. institution benefits by receiving tuition revenue without adding physical on-campus infrastructure such as more housing.

To do this requires immensely skilled intervention and operational know-how to overcome the cultural disconnects, bureaucratic barriers — which includes the U.S. educational institutions — and language difficulties, all to bring the recipient countries toward a fully-functioning, credentialed training infrastructure.

I know no one better qualified and passionate to successfully lead this critical mission than Chuck Flynn.

R&I: What kinds of issues have you actively engaged in to date?

SM: Our critical missions range from rapid response initiatives, where the needs are immediate and others would be too slow or unable to respond, to complex, long-term operations which could take generations to reach their ultimate goal while rendering ongoing service.

Our long-term mission of citizen diplomacy, logistical support and advisory was very active in 2020 and 2021. This mission works to promote international peace by providing the critical logistics planning and resources needed to accomplish the safe and humanitarian release of people detained around the world, including journalists, prisoners of conscience, and others caught as pawns in larger conflicts.

We have engaged in-country hostage release negotiations and in-country evacuation logistics in multiple countries including Venezuela and Afghanistan. Today, I can’t discuss the details of these efforts due to the sensitive nature of these ongoing operations.

R&I: How do you engage with the focus areas you choose? Is it primarily with financial contributions or do you provide other kinds of resources?

The only narrative you’ll see running through our critical missions is the application of our distinct set of skills and a desire to help people in need — whether just a few or countless. There are plenty of foundations and charities with plenty of money.

Of course, we provide the necessary funds in support our causes, but, and more importantly, we provide what is otherwise lacking by bringing forth a package of resources in every case: intellectual, administrative, physical resources, as well as political and public benefit relationships. And then so many more; some you’d never expect to come into play as we progress in attacking a problem.

But, let’s keep in mind that the bold thinkers themselves who manage the various causes are not paid employees. They are capable volunteers formerly from senior positions willing to devote themselves to their cause and share their experience and vision creatively, purposefully and generously. This is better than a purely financial contribution since these individuals share their resources, energy, and expertise to solve intractable, critical problems.

R&I: Tell us, please, about your involvement with the St. Francis Day Foundation. When did you get involved and in what capacity?

SM: This past May, I had the distinct honor of meeting with his holiness Pope Francis at his residence in Rome and was named by him to found and head the global St. Francis Day Foundation.

The foundation was formed to realize the goals outlined in Pope Francis’ Encyclical, Laudato si’, for bettering what Pope Francis calls “human ecology.” The goal of the foundation is to translate the needs and approaches Pope Francis has set forth in his writings into an action agenda. I am chairman of the newly formed, four-month-old, foundation for which we have begun to gather interested people on five continents so far.

R&I: What sorts of issues is the St. Francis Day Foundation engaged in?

SM: The overall answer is issues that affect what the Pontiff has termed “human ecology” from setting a balanced approach to environmental issues, to helping the most needy among us. When we launched the foundation this last October 4 on St. Francis Day, we set forth the philosophical underpinning for the foundation, concordant with the writings of Pope Francis. We will be announcing specific appointments and initiatives in the coming months.

R&I: What does the memory or the legacy of St. Francis mean to you?

SM: St. Francis, while best known for his writings on the care of creation in all of its manifestations, for his special ability to find the divine in every aspect of the physical world and for his modest and selfless life, was also a man of action. He intervened in a war, growing a corps of missionaries to perform works of world changing implications.

As the world shrinks and the scale of challenges near to us seems to multiply, many individuals and communities are afflicted with a sense of futility, meaninglessness and despair. The example of Francis of Assisi provides a context for the foundation’s planned, far-reaching social and civic impact — namely the need for engendering respect for nature, for civil discourse and civility, and for the plight of the disadvantaged through educational, cultural, civic and social initiatives.

When I visited Assisi this last October, I was privileged to meet with the keepers of the heritage of St. Francis and to see and read his actual handwritten words. We will be presenting his life and heritage in the years to come in an exhibit including works from Assisi that have never before left its walls; it will travel to a number of cities around the world. The goal is to inspire and to set the groundwork for the advocacy of a new, fresh context for the consideration of those issues of human ecology that face us everywhere.

R&I: What’s your view of the role and presence of philanthropy in the insurance industry overall? Are you impressed by it or do you find it lacking?

SM: Insurance is generally a good business in the moral sense, in my view, serving as it does the smallest and largest of risk takers at their time of need. I have seen the faces of workers whose careers we have brought back after accidents, of widows whose lives will be supported by a life insurance policy. So, its essence is good. Add the many charitable undertakings in which insurers are involved and you have an industry that is dedicated to societal wellbeing.

From the agents and brokers who are cornerstone volunteers in their communities, to the companies and executives who contribute hospital wings, college scholarships and the like, I feel that the insurance business is inclined more than many others toward charity — perhaps as a result of our role in solving the adverse results of so many natural and man-made tragedies.

The only area where it might be said to be lacking is in the direct-action approach when societal problems face us, but I believe that, as a highly-regulated industry, perhaps insurers prefer to stay on the sidelines when a problem has clear cut political implications. That aside, we can be quite proud of our business.