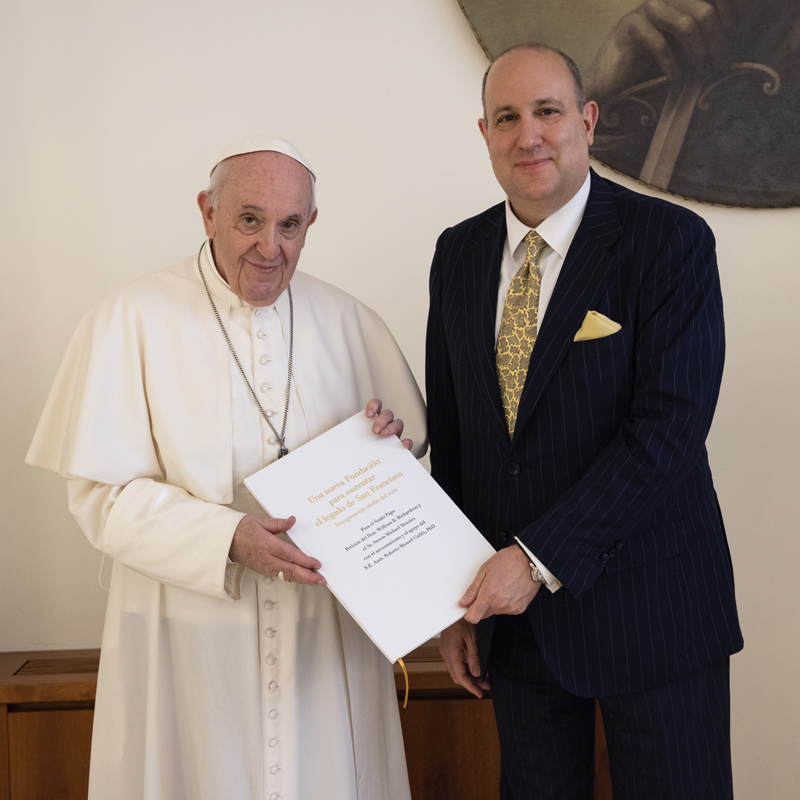 (New York, New York… Wednesday, August 18, 2021) Marking the sixth anniversary of Pope Francis’ landmark papal encyclical, Laudato Si’ and responding to the Pontiff’s expressed desire that his encyclical’s words be translated into action, the St. Francis Day Foundation was formed at a meeting held in Rome on May 26, 2021.

With the Encyclical and the words and example of St. Francis of Assisi serving as contexts, the nonprofit organization was created to serve mankind through mandates addressing “human ecology,” with far-reaching social and civic implications. Pope Francis, who has repeatedly identified the need for engendering respect for nature and for the disadvantaged through educational, cultural, civic and social initiatives, has encouraged these efforts worldwide in many communications and has now given the Foundation its mission.

The new Foundation was formally created during an organizational meeting in Rome led by the Pontiff. It will be chaired by American business leader, Mr. Steve Menzies, Founder and Chairman of Applied Underwriters, and Founder and Chairman of the Steve Menzies Global Foundation, long an exponent of care for injured workers, of public diplomacy and extensive philanthropy.

The Steve Menzies Global Foundation has pledged resources and funds to the new Foundation to facilitate its startup and then to its ongoing operations. More than US $50 million has been pledged to the St. Francis Day Foundation in cornerstone grant commitments from a variety of important corporate and foundation resources and from several generous individual benefactors seeking to support the encyclical’s approach to solving the world’s most pressing problems.

The Foundation will establish its operational headquarters in New York with chapters to be added in countries on every continent to serve as bases for the Foundation’s work. The Foundation’s Board, currently in formation and scheduled to be announced later this year, will include leaders from the worlds of academe, diplomacy, commerce, the arts and public service who have expressed great respect for the undertaking and the work planned.

On October 4th, St. Francis Day, the Foundation will launch important, ground-breaking, worldwide initiatives to address the first of many advances in its service of human ecology. The day’s events will include panels, programs and an address outlining the Foundation’s plans for achieving social and civic impact as set forth in the words of the encyclical and as established by the enduring example of Francis of Assisi.

Among the first activities underway are the provision of vaccines and medical equipment to displaced peoples, and the creation of curricula and studies that seek to place technology into a context that offers perspective to the young and to those in danger of digital addiction.

The Foundation’s mission has been divided into three mandates, reflecting the wishes of Pope Francis:

The First Mandate refers to the Encyclical’s advocacy of respect and care for the natural world, consonant with the words and deeds of St. Francis of Assisi. Through its programs, the Foundation will urge attention to the proper custodianship of our world through responsible commerce and through the weighing of organizations’ activities and their implications on the environment.

The Second Mandate refers to the urgent need to address human ecology, as outlined in the Encyclical, aligning technology with the most important of spiritual and ethical values and placing technology’s dynamic instruments in their proper human perspective, for optimal use.

The Third Mandate refers to the elements first introduced in Laudato Si’ and expanded upon in the Pope’s latest Encyclical Fratelli Tutti; that is, we must cultivate sensibilities and passions among men and women so that we find true brotherhood and longed for peace in the world, regardless of a particular faith or political formulae. The encyclical calls for “a better kind of politics” based upon refreshed principles of brotherhood and respect.

Mr. Menzies observed: “We have been moved by the outpouring of pledges of support from so many quarters since May, but we are not surprised in one sense. This entire initiative derives from the words and works of one of history’s greatest exponents of peace and respect for nature, Francis of Assisi. These realities are relayed in the 21st century by a holy man of foresight and depth, seeking to tackle the social issues of the day in a meaningful context. Much like many of his predecessors, from Pope Leo XIII and his care for the dignity of the worker – a cause especially close to me as a corporate leader and insurer of workers’ wellbeing – to Pope John Paul II and his fierce opposition to conflict and the subjugation of so many of the world’s peoples by dictatorial regimes, today Pope Francis moves to influence the world’s thought leaders and to shepherd its citizens with a message of fraternity, reverence for our world, and brotherhood. The St. Francis Day Foundation in collaboration with the Steve Menzies Global Foundation and the many other support resources will bring that light and that message to the world.”

About the Steve Menzies Global Foundation
The Steve Menzies Global Foundation is a non-profit organization that takes a creative, constructive view to solving grand scale problems related to societal issues, economic issues and intellectual advancement. The Foundation engages Bold Thinkers from its worldwide network of individuals willing to apply and generously share their energy, intellect and resources to solve complex problems that risk going unsolved.